Alan Turing is closely associated with the invention of the modern computer. He and his team cracked the secret Nazi code used by Hitler during the Second World War at a time, when the allied forces were desperate, as their supply boats were sunk by German U-boats Turing’s Colossus is considered the first programmable electronic computer. But his work was kept a secret for a long time after the war ended. He was not honored at all. On the contrary, he was hounded out as he was a gay. He was forced to undergo chemical castration.

Unable to stand the social pressure, it was reported that he bit a cyanide- laced apple and ended his life in suspicious circumstances. It was only in 1974 that his role as a computer expert and the computer cluster he organized at Bletchley Park near London were disclosed. Only in 2000, did the British government fully declassify the incredible contributions of this unsung hero. At a conference in England in 1976 on the history of computing, Prof. Brian Randell pointed out that his review of once-classified papers proved that Colossus, the English computer, which broke the German code, drew on Turing’s seminal 1936 paper for its specifications. Randell also gave credit to Max Newman, a designer and Tommy Flowers, a Post Office engineer, who constructed Colossus.

While no one should undervalue Turing’s contribution, historians have pointed out that Turing, who lived alone, did not work alone. He had a good team. Moreover, the code he developed benefited from the work of Gordon Welshman, a mathematician, and Harold Keen, an engineer, besides same polish contributions.

Turing’s technique cracked the Tanny (German) messages via tele-printers and its code opened Enigma, the German military’s typewriter-like cipher machine. Turing helped the Allies know in advance the strategies and positions of the German troops and take effective counter-measures in time. The Director of the Turing Archives for History of Computing has, in a centenary tribute (marking the 100th anniversary of his birth in 2012), pointed out that but for Turing, the War would have prolonged. Vint Cerf, Internet pioneer, has in a communication to the BBC said, “Turing lit the way for all those involved in the technology industry. His is a story of a math genius whose insight saved thousands of lives but could not save him from social condemnation with tragic result”. Cerf hopes that the celebrations “would make Turing a household name beyond the technical community that honors his memory”.

In 2009, the then British Prime Minister, Mr Gordon Brown issued an apology for having treated Turing ‘inhumanely’. But Turing was not officially pardoned. Stephen Hawking and several leading British scientists have called for a posthumous pardon for Turing, describing him as one of the most brilliant mathematicians of the modern era and whose work shortened the Second World War. 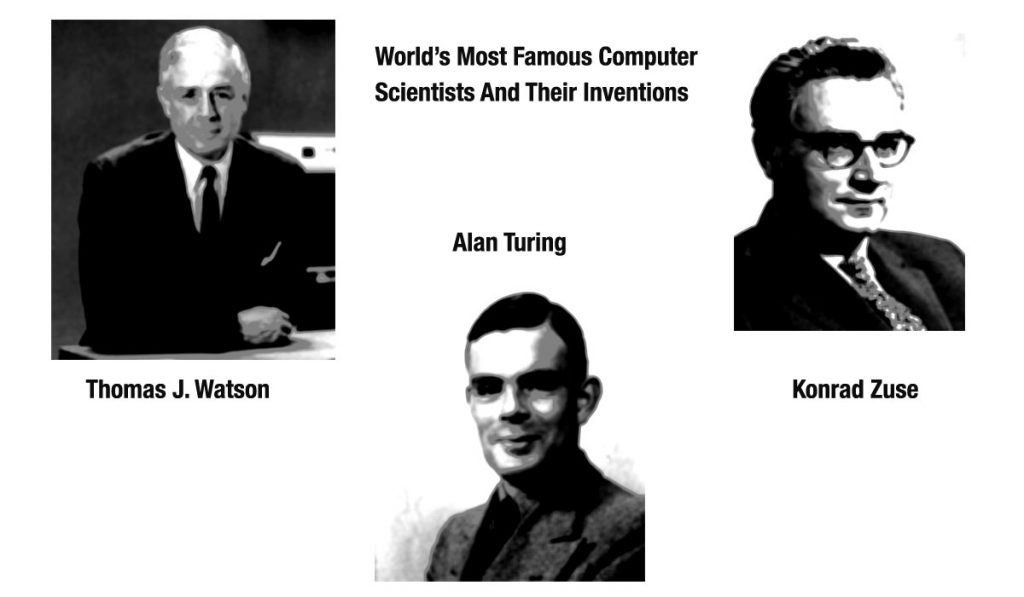 Development Of Computing – Other Contributers

Konrad Zuse (1910-1995) in Germany of Hitler’s days developed a fully functional and programmable computer, called Z-1 (1936), but his Z-4 machine was destroyed four times by British bombers only to be rebuilt again and again. Zuse escaped from Berlin and developed computers called the Z series. His mechanical memory had 16 words in 1947 and 1024 words in the 1950s. He also went on to devise the first-ever programming language in the 1940s, and many modern mathematicians regard him as a pioneering genius.

Historians point out that unlike the case of missile technology, the US computer technology has not been based on German inputs. The first American who can find a place in the history of computers is William Burroughs, a bank clerk tired of the drudgery of his job. He built an adding machine. Another American, Herman Hollerith, devised a punched card system for statistical tabulation first used in taking the census of his country.

In 1939 a digital computer performed mathematical calculations in binary form using on-off relays. It took 30 seconds to do a simple sum. But it showed the way. In 1940 the first long-distance computing was done. A computer at Bell Labs was remotely operated by a teletypewriter.

In 1942, John Atanasoff (1903-1995) of the Iows State University built the first electronic digital computing device with the help of his student, C.E. Berry. Thought it was not a general purpose computer, it was the first to represent all numbers as binary digits and use electronics instead of mechanical switches. Its development was interrupted as Atanasoff left for a War assignment. Its importance was realised when a US District Court later ruled that the inventors of the general purpose computer, ENIAC, had derived ideas from Atanasoff’s machine.

In the 1940s Prof. John Mauchly, a visionary physicist (1907-1980), and his younger colleague, Presper Eckert (1919-1995), an electrical engineer, virtually launched the modern era of computers. They developed four classic computers called ENIAC, EDVAC, BINAC and UNIVAC. ENIAC (Electronic Numerical Integrator And Computer) is the fist fully operational, general purpose, electronic digital computer. It was built at the University of Pennsylvania’s Moore School of Electrical Engineering in 1946 for the US Army.

ENIAC weighed 30 tons and covered 167 sq. metres of floor space with about 18,000 vacuum tubes and 6000 manual switches, consuming 160 kw of electricity. It was a challenge to maintain it as one valve was failing every day or two. The calculations it did were quite impressive: 5000 additions and 1000 multiplications in one second. In half a minute, it solved a problem that usually took 20 hours with a desk calculator. It did more calculations than all mankind had done up to its installation.

Observers feel that Eckert and Mauchly were not given due credit for the ENIAC. Ironically, they inspired a visiting British computer scientist, Professor Maurice Wilkes of Cambridge, England (1913-2010) to build the first operational stored programmed computer in 1949, though an experimental prototype had earlier been developed at Manchester Called EDSAC (Electronic Delay Storage Automatic Calculator), the British computer had more than 3000 valves spread across a chassis made up of over 100 steel shelves. It is described as the beginning of the operational phase of the computer age, as most computers prior to it were experimental. EDSAC is being rebuilt in England.

After the ENIAC, Eckert and Mauchly took up another project and built UNIVAC, which was the first commercial computer. It was designed for the US Census office. It was demonstrated and dedicated to Philadelphia in 1951. The other computer, EDVAC (Electronic Discrete Variable Automatic Computer) was built at the University of Pennsylvania for the Ballistic Research Laboratory in 1950.

According to Prof. Randell, EDVAC is the forerunner of modern computers and not the American ENIAC. But ENIAC provided a unique opportunity for Von Neumann, who adopted a new technique based on the idea that data and programme (instructions) could be stored in the same memory, a revolutionary concept that has underlined all digital computers even since. It is ironic that a technique, which was first applied in perfecting the nuclear bomb, triggered a revolution in computers for widespread use in peace time.