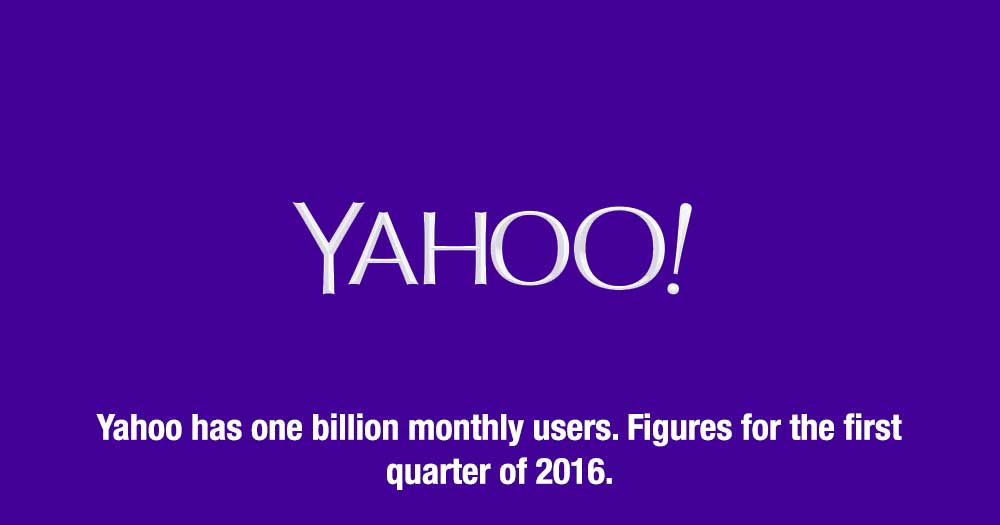 It has been a challenging journey of hope for Yahoo!, the Internet’s popular network. In a competitive world dominated by Facebook and Google, Yahoo! has shown remarkable dedication in serving the users in accordance with changing demands. As its official description says, ‘Yahoo! is focused on making the world’s daily habit inspiring and entertaining’.

In January 1994, Jerry Yang and David Filo, electrical engineering graduate students at Stanford University created a website called ‘David and Jerry’s Guide to the World Wide Web’. It was a directory of other websites organised in a hierarchy rather than an index of pages. In April that year they renamed the website as Yahoo! (short for ‘Yet Another Hiererchical Officious Oracle’). The last word stood for a source of truth and wisdom, familiar to ancient Greeks. Yang and Filo however insisted that Yahoo was slang for an unsophisticated rural Southerner in the USA.

Yahoo! started off well. It soon diversified into a portal and made a series of acquisitions worldwide. Its stock went up reflecting the dot com bubble. In 2000 the site began using Google for its search results. It made headlines as the collector of data far more than its rivals. In 2004 it gave up its dependence on Google and made its own web searching algorithm. Its Search Direct provides real time answers to specific questions on restaurants, working hours and booking details etc.

The answers are actionable instead of more lists of references. Like Google Instant, it can provide answer even before the user could type the query in full. It announced its decision to accept payment for its search service though the search will be mostly free. In 2007 the network launched a new Internet advertisement and sales system called Panama. It also competed with Gmail in 2007. The Search Direct feature is also being designed for smartphone and tablet computers.

Yahoo! Mail offered unlimited storage and several social networking services. It partnered with several content providers related to sports, music, finance, music movies news and games. It embarked on joint ventures with firms Australia and New Zealand. In its dealings with China, Yahoo! decided to give away its shares to the Chinese company. In 2012, the largest Chinese e-commerce company, Alibaba completed the initial purchase of shares from Yahoo! China.

However, by 2008 the company had to resort to many layoffs. Despite its difficult journey, Yahoo! kindled a lot hope. Micro soft made an unsolicited bid offering a good price. But Yahoo! rejected the bid. In retrospect, some observers feel that it was not a wise decision. Despite its numerous achievements, Yahoo! faced financial challenges. It announced the integration with Facebook Connect service (2009) and launched mail and messenger apps for Android (2010).

In 2012, Yahoo added a new browser called Axis, for use in Apple’s mobile devices and on desktops through plug-ins which allows users to see thumbnail previews of their search results which can be marked as favourites or ‘to be read later’. The results get loaded instantaneously as you type.

In recent years Yahoo! has gained momentum in launching new products involving multimedia search, under Marissa Mayers, its new CEO. In a significant move, Yahoo! acquired Tumblr, a site that combine elements of blogging with social networking. Tumblr has 300 million monthly unique visitors and it is reported that 120,000 sign up every day. Together, Yahoo and Tumblr are expected to increase their audience by 50 per cent to a billion monthly visitors in the next few years. Yahoo!, which had conceded somewhat of its market share to Facebook and Google (according to a research agency), has gained impressive growth of late reaching 280 million unique visitors to its services.

Yahoo! Mail app in English is available on several platforms (iOS, desktops and Android) in many countries including India. Yahoo!’s second largest R&D centre outside the US is in Bangalore. The centre has been a major contributor in designing multimedia products of Yahoo! for several markets worldwide. The centre’s focus on India includes presenting the content in local languages – a significant strategy as the Internet in India is spreading to smaller towns and rural areas. The researchers envisage a web which will cater to the illiterate. Picture recognition is a key component of its data display techniques. The emphasis is on machine learning, where human gestures, voice and touch play a key role in accessing the Internet and its programmes. Yahoo! gives importance to India as it expects a significant increase of its user base in the country. Yahoo!’s entertainment features, especially its cricket pages have been quite popular.

Early in 2013, Yahoo! redesigned its home page. Several new features have been introduced including disposable e-mails (when you do not wish to use your accrual e-mail ID), and a welcome slot for ‘curated’ Flickr photos sent by users for display with a theme or point of view. The home page has been made visually rich with photos selected from Flickr. Storage for users has been increased to 1 terabytes, which can hold 50 million average sized (20 kilobyte messages), enough to last for ten years if not more, for an average user.

Yahoo! has assured its clients that it will encrypt all user information that moves between its data centres. This follows allegations that the US government had secretly accessed user data without the company’s knowledge. Yahoo! started that it would never disclose user data to any government agency.

The proliferation of social networking sites has triggered new ideas. Perhaps the most noteworthy is Diaspora* (with an asterisk added at the end), created in 2010 by four college students in their early 20s. The creators, Rafael Sofaer, Maxwell Salzberg, Ilya Zhitomirskiy and Deniel Grippi are from New York University’s Courant Institute of Mathematical Sciences. They got donations totaling more than 200,000 dollars through Kickstarter, a fund-raising site.

The young men insist that they do not aim at replacing Facebook. The Web today, they say, is a sea of social networking islands. The Diaspora* creators envisage a federated social web, which gives users more choice than before. Diaspora* does not carry advertisements. It is designed to allow every member of the network to ‘own’ his or her personal information. It views the conglomeration of personal information by large companies and government bodies as a threat to civil liberties and human rights.

At present, one cannot send messages between Facebook and Google+. One might use Instagram for photos, Tumblr for blogging and SoundCloud for music but they will all be interconnected via Diaspora*. On Tumblr, about 150 million users share similar content every month. Invented by David Karp, a 27-year old high school dropout, Tumblr promotes what is known as ‘curation’, which means a new accessible way to express one’s point of view based on the material that one likes, and is collected online. More than 3.5 million photos are uploaded daily, mostly from smartphones. India has about two million Tumblr users.

Yahoo! acquired Tumblr on 20 June 2013 for an amount of $1.1 billion approximately, with David Karp as its CEO.

Foursquare is a location-based social networking website for mobile devices. It has Geographical Positioning System (GPS, which provides satellite-derived positional information of a wanted location) to enable its users find their location accurately. The site, invented by Dennis Crowley and Naveen Selvadurai in 2009, has 10 million registered users. The site registers three million checks-in per day. The site is useful for disclosing the user’s location to one’s friends.

StumbleUpon is another interesting site; it is a giant collection of the best pages on the Internet. If you tell the site your interests, it will recommend great websites, photos, and videos relating to your choice. Numerous small-scale networks with specific aims challenge a few big companies from dominating the scene and social interactions. Plurality of social networks is the best safeguard against monopoly.