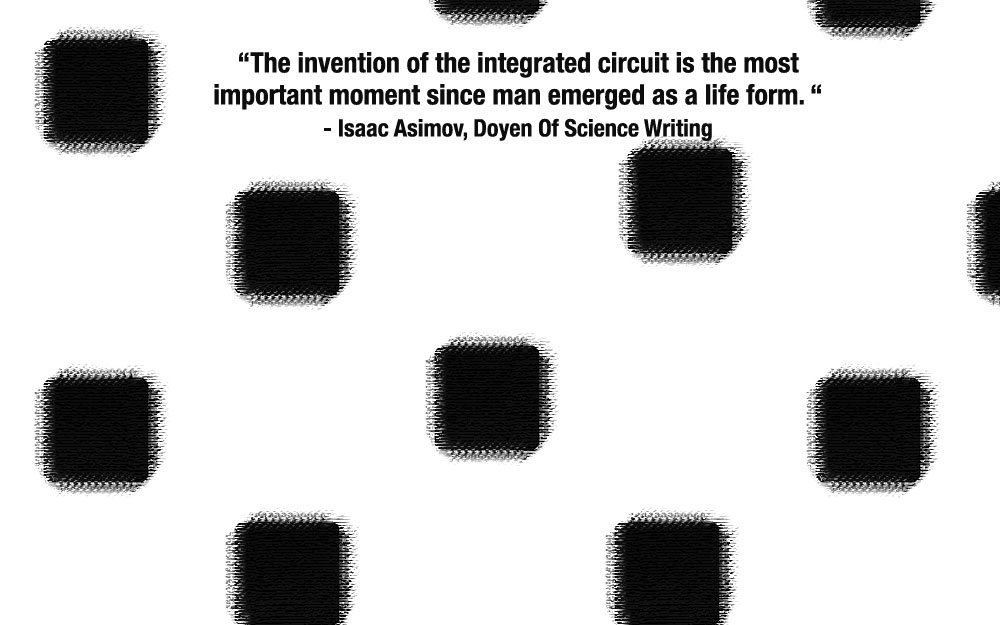 The microprocessor or electronic chip, as it is called in common parlance, has driven the computer revolution and has played a key role in redefining the Internet in articulating and recording our thoughts. The way the transistor has triggered the revolution in microprocessor is a tribute to human innovation and enterprise. The potential of the computer was redefined by the transistor, which replaced valves. The transistor invented in 1947 by William Shockley, John Bardeen and Walter Brattain, paved the way for the integrated circuit (1958) and later to microprocessors.

Shortly after the IC was developed, many scientists considered the possibility of a computer on a chip. The idea was to place all the parts that made a computer think (central processor unit, memory, input and output controls) on one small chip. In the 1960s many thought that the IC technology was not yet ready for such an innovation. But one engineer thought differently. He was Edward Ted Hoff (born in 1973), who invented the first single-chip microprocessor, along with Federico Faggin and Stanley Mazor (who wrote the software). All parts that made a computer think were placed on one single chip. Programming intelligence into inanimate objects became possible.

A microprocessor is a multipurpose, programmable, electronic device. It accepts binary data and processes according to instructions stored in its memory and provides results as output. Built on a tiny piece of silicon, its production involves more than 300 steps in a sophisticated production unit. Using chemicals, gases and light, millions of transistors are integrated into it layer by layer. The integrated circuits composed of transistors store and manipulate data for various functions.

In the late 1960s, a calculator-maker in Japan wanted Intel, which had just been founded by Robert Noyce and Gordon Moore, to make 12 custom-built microprocessors. Ted Hoff suggested that Intel could build one chip to do the work of 12 and won the client’s approval. Ted and his team produced the chip, which had 2300 transistors and as much power as the ENIAC. In a unique strategic move, Intel bought back the design and its marketing rights from the Japanese company. The revolution in processor technology returned to America.

In 1971, Ted and his team developed a similar chip for Intel in an area of only 3 x 4 millimeters. With its 4-bit central processor unit, it had command register, decoder and a register—all elegantly integrated into one chip. Intel 4004 accepted binary data and processed it according to instructions stored. It was hailed as a breakthrough—being the world’s first single chip microprocessor. Even today, 64-bit microprocessors are based on similar designs. Interestingly, Ted had a pace-maker inserted inside his body to stabilize his heart-beat powered by his own invention.

Before Intel started its production, a Swiss emigre in the USA, Hans Camenzind invented a simple integrated circuit. Known as 555, it could function as a timer. The device became a best seller and ended up in a range of applications from toys to spacecraft. It was later used in online games like Ninetendo and Atari.

Innovative use of chips brought down the price of processors, promoting the personal computer (PC) revolution. The first PC to use Intel’s 8088 chip was IBM’s model 515. The PC was introduced in 1981. Although the description, personal Computer, was used in 1972 to indicate Xerox PARC’s Alto, the term PC was largely associated with IBM Products.

In was a 16-bit central processing unit, which went on to dominate the computer market. It was soon followed by Motorola’s 16/32-bit chips which packed 68,000 transistors, more than doubling Intel’s 8086 chip. In a 32-bit architecture, the amount of memory that can be addressed is 2 to the power of 32 or 4.3 billion values. While 32-bit computing is limited to accessing up to 4 GB of RAM, in a 64-bit architecture, the processor can in theory handle 18,400,000 trillion values, which is enormous amount of memory. It took ten years to transit from 16-bit processors to 32-bit chips. Since Windows 95, 32-bit processors became common place. Today, 64-bit chips are in use where access to lots of memory is needed.

In 2013, the world’s first 64-bit computing on mobile phones was introduced in the new version iPhone 5S to facilitate improvements in gaming and apps in the long term.

Vinod Khosla grew up in an Indian army household with no business connections. Yet he dreamt of becoming an entrepreneur. He obtained a Bachelor’s degree in electrical engineering from IIT, Delhi and tried his hand in starting a soy milk company to serve people who do not have a refrigerator. He went to the USA and did his Masters in Biomedical engineering at Carnegie-Mellon University. He then went to Stanford University and got on MBA (1980).

Khosla was one of the three founders of a computer-aided system for electrical engineering. Based on his experience, he started Sun Microsystems in 1982 to build workstations for software development. He pioneered the use of a new type of processor called RISC (for Reduced Instruction Set Computing) to replace an earlier version, designed to carry out instructions faster than before.

Today Khosla is a veteran venture capitalist known for his determination to back ‘disruptive technologies’. In October 2011, a venture capital firm run by him closed a one-billion dollar fund that ranked as one of the biggest new venture funds of the year. A large portion of it is expected to be invested in clean technology. What is remarkable is his decision to promote clean energy technology, when investment in the sector has cooled off.

In a recent article, Khosla has decried the obsession with the goal of acquisition of one’s firm by a big firm rather than providing a unique service. While he is not against profit motive, he would not like its pursuit at the cost of innovation.