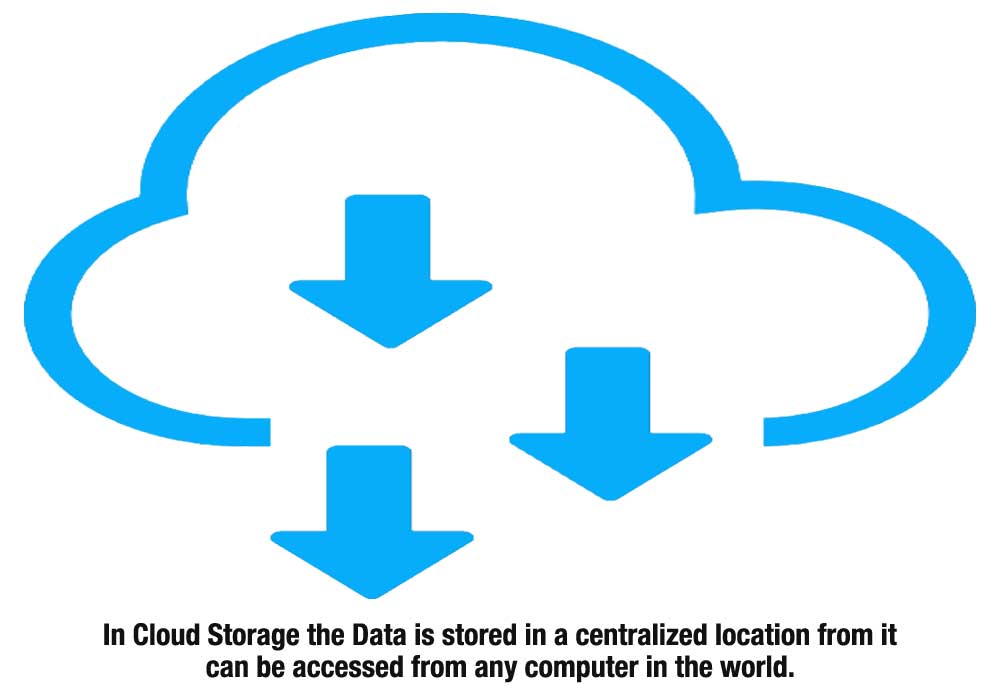 Cloud storage of personal data and photos has become popular, especially because it is possible to sync the data in the cloud across multiple devices such as computers, laptops and smartphones. Google Drive (introduced in 2012) enables you to create, share collaborate and keep all of your files, photos, video, documents in PDF etc. Google’s Picasa (now with Google Plus) can store photos. One can create online documents, spreadsheets and presentations and let others to edit them at the same time. The changes made will be retained for 30 days. Google Drive starts with a free storage of five gigabytes followed by paid upgrades.

Microsoft offers cloud-based services on its Windows Azure platform. It is moving some of its services such as Outlook, e-mail and SharePoint into online format. Microsoft’s Office Suite including word, Excel and PowerPoint are already cloud-based. Microsoft has upgraded its Office 365, which combines all of its cloud offerings and enables its users seamless sharing of data across multiple devices including mobile phones. Its SkyDrive (www.skydrive.com) provides access to files on the go, besides offering file-sharing facility. It provides up to 7 gigabytes of free storage, which is considered adequate for almost all users. Its Live Gallery App and Google’s Picnic enable users to edit photos. Its Window server 2012 offers a server platform designed to provide a cost-effective IT infrastructure linked to cloud-based services, and enable companies to run many virtual networks on one physical network.

There is a view that what is more urgently needed for Indian education is tools to facilitate online learning rather than cloud storage. In this context, it is significant to recall that the All Indian Council for Technical Education (AICTE) has mandated that Microsoft Office 365 — a free package of mail, storage and software in the cloud – be used in all engineering colleges across the country from June 2013, involving about 7.5 million Office 365 accounts.

It is pointed out that while Microsoft allows users to upload and edit both proprietary and open formats, it allows downloading and saving of files only in its proprietary formats (for example .docx) for offline use, which would attract a license fee. AICTE’s choice of Microsoft 365 has been criticised by some Indian institutions, which have developed online school learning and management software. One such system is Modular Object Oriented Learning Environment, which is free software. Another system, called Sampoorna, is adopted in Kerala in about 15,000 schools, powered by Fedena, a free and open source software.

Another online storage, Dropbox, is also reliable and easy to use. It works with Widows as well as Mac. It is a free service that lets you bring all your photos, documents, and videos anywhere. Once installed in your computer, your files can be saved in your Dropbox and can be stored in the Dropbox website. Another site, SugarSync enables the users to determine the folder they wish to sync with other devices. Users can send links instead of only attachments. Other photo-sharing sites include Yahoo’s Flickr, Photobucket and Foundation.

Cloud computing can provide musical experience as well. Apple’s music store is a cloud-based service. An iPad can get you eight million songs (expected to go up to 70 million in five years) from the cloud. Music bought on any one Apple device can be propagated across all the Apple devices of the owner. Cloud will not stream music but will store iTunes. Since the Music Store has opened online, Apple has become the biggest music retailer with the sale of over 15 billion songs. Apple has linked all its services to the cloud: photos, songs and documents.

Amazon’s e-reading device, Kindle, is followed up by its Kindle Cloud reader, which is its Web browser-based version. The new version is in accordance with the business practice of ‘But once and read everywhere’. A user can access the book from any device such as the iPad, Android tablets and PCs. The first version is designed primarily for the Safari and Chrome browsers.

Centralized hosting of cloud-based business application has become popular. For example, Salesforce.com is used by 85,000 organisations and the users number two million. Small and medium businesses have access to greater computing power than ever before because of cloud computing facility.

Cloud computing may mean different things to different people. Some may view it as a software service; others may consider it as a platform for services, while some others may think of it as infrastructure for electronic storage. The most widely known form of cloud computing is SaaS (Software-as-a-Service), which provides all the function through a browser and not as a locally installed application.

The concept of hybrid cloud is emerging as a model that combines the advantages of public and private cloud computing. It is becoming popular as enterprises expect to maintain the reliability of in-house data security, while still benefiting from the public cloud. Public cloud is offered as a service via web application (usually over an Internet link). Private cloud is an in-house cloud computing that offers hosted services to a limited number of customers from behind an organisation’s firewalls and managed by the user organisation.

The post-PC era is sometimes described in terms of cloud computing. Personal cloud will replace the personal computer by 2014. The trend is illustrated for example by Google Drive, an online file storage service will be integrated with Chrome OS. Microsoft and Apple also weave the cloud into their next generation of desktop and other devices.

Microsoft lets people subscribe to its Office as a service in the Internet cloud. Documents and other files created using the Office programme can be saved at Microsoft’s Sky Drive, which has a large storage capacity (27 gigabytes for subscriber).

If you are relying on your computer and smartphones to replace pen and paper, it is better to back up your data. And there are service back-up services such as Blackblaze.com, Crashplan.com, Dropbox.com, Sugarsync.com, Fresh Books (for reviewing cash flow) or Google Drive. BitDefender is an iPhone app, which analyses how your free data have been downloaded.

Online banking, even though cloud-based, is considered reliable. A beginning has been made in India in cloud storage of healthcare-data. Narayana Hrudalaya, a chain of private hospitals providing advanced cardiac and other care has installed an information system based on cloud computing.