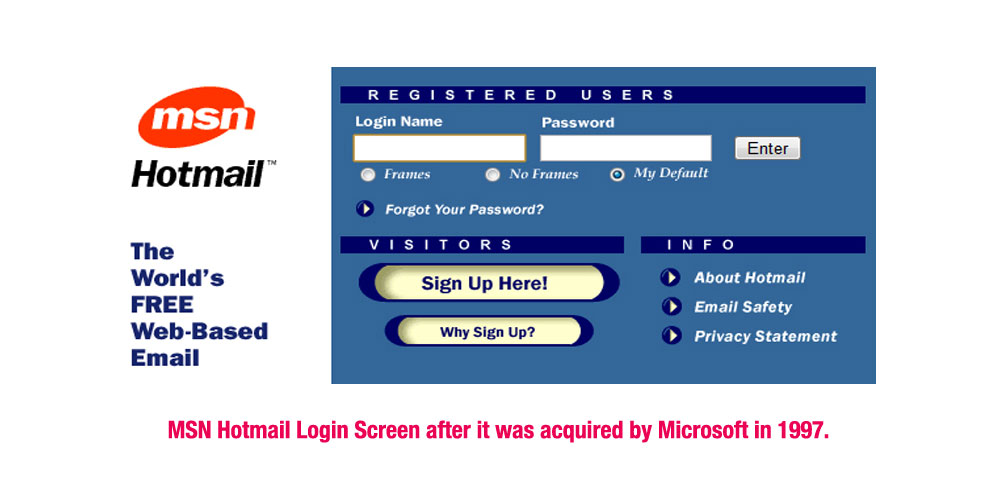 The new ubiquitous Hotmail was developed by an India born 27-years-old engineer, Sabeer Bhatia. He was born and raised in Bangalore. He did well at school and won a scholarship at the Califorina institute of technology in the USA. In 1998, with just 250 dollars in his wallet, he landed in the USA. He felt lonely and found it hard to understand the accent of the West Coast. He did his Master of Science at Stanford. He was inspired by the lectures of Steve Jobs of Apple and Vinod Khosla of Sun Microsystems.

Bhatia worked for a while at Apple and after nine months left the company. He wanted to accomplish something useful based on the Internet. He proposed to create a personal database called Javasoft. Jack Smith, an Apple colleague suggested that e-mail be attached to Javasoft, so that people can access e-mail from any computer anywhere on the Earth. He chose the name ‘Hotmail’, which included the letters HTML, the programming language to write the web pages. But Bhatia had little money and his efforts to find investors were frustrating. As many as 19 doors were slammed before he met with success. Steve John Jurvetson and his colleagues put up 300,000 dollars for his project. Bhatia inaugurated his project on 4 July 1994,the American Independence Day.

By the year end, hotmail attracted a million customers. A year later, it had million users when Microsoft offered to buy it. When people though it was a golden opportunity, Bhatia refused to sell for the price offered viz. 160 million Dollars. He proved to be a tough negotiator, saying he was used to bargaining even when buying onions at home! Eventually, his tenacity paid off and he accepted 400 million dollars worth of shares. Hotmail has turned out to be one of the greatest success stories yet of the Internet.

Back home, Bhatia had ambitious plans to wire India and create conditions for a socio-economic revolution. He dreams of doing better deals in India with less of the red tape. In 2011, a company founded by him and Yogesh Patel launched JaxtrSMS, an application to send a text SMS service to any mobile phone in the world for free without requiring the receivers to have the company’s application installed on their phone.